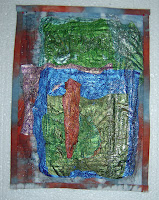 This journal quilt is the third in the row I am making for my c&g course. It is inspired by the work of Saskia Weishut-Snapper. I started working on a handdyed piece of fabric. On that I placed several pieces of painted tyvek - I used Lumiére paint - and some strips of bubble wrap. Covered this with black gauze. Stitched everything together and than used my heatgun on it.
I probably should not have stitched it together as it ended up very uneven. So I removed the stitching. The next step was to add batting and backing fabric and quilt it.

The 4th journal quilt will not be ready tomorrow. I have not even started working on it. Instead I did some dyeing. For my dyeing group I had to create 8 f8's of shibori. Here are the pictures: 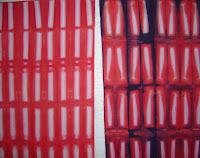 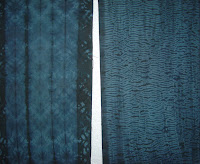 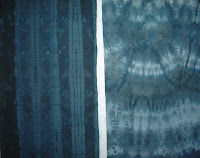 Both of these fabrics I wrapped with Dual Duty yarn. The different patterns are caused by the way I wrapped them. The one at the left was folded first in a long strip and than I stitched/wrapped yarn around it. The fabric at the right was twisted and some parts were wrapped with yarn while other parts were left like they were. 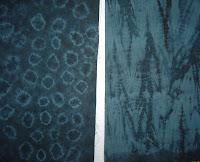 For the fabric at the left I gathered tiny bits of fabric and wrapped yarn around it. The one at the right I wrapped like the one which is above it. The only difference between them is with the top one I had left parts of the fabric unwrapped.
Posted by Wil at 17:18 1 comment: 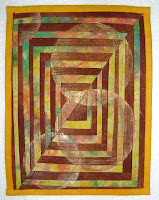 The next journal quilt I made is in the style of Gloria Hansen. I used a distorted logcabin pattern, cut it into two pieces and used a parfait and a solid handdyed fabric. Accidently I distorted it too much as you can see at the bottom and left last strip. After the log cabin was completed I cut circles out of freezer paper, ironed this on top and applied different colors of Markal (Shiva) paintstiks on it.
I am now working on the third journalquilt. Picture of that one will come tomorrow.
Posted by Wil at 15:24 No comments:

Here is the first journal quilt using - for me - different styles. It is inspired by the quilts Ann Fahl creates. Her style is to work on a patched background of squares with fused applique cone flowers on it. Her flowers and leaves are heavily embroidered and the background is closely quilted.
The other quilt artist I have chosen for inspiration are Gloria Hansen, Pam Rubert and Saskia Weishut-Snapper. So expect more journal quilts the coming days.
Posted by Wil at 11:33 No comments:

With the ChallengeQuiltsGroup we had winter as a theme for our first challenge. With this theme in mind I created this quilt. Size is 20"x20". On the fabric I layered lutrador, angelina film, cotton balls, gauze and added different white beads after the quilting. I have called this quilt 'Cracked Ice', but you can also see skiing tracks in it. 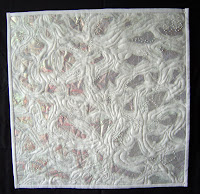 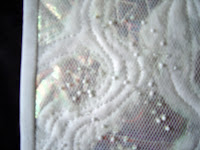 It was different than the style I normally work in, but fun to do. And speaking about different styles, the coming days I will show you more journal quilts in - for me - other styles.
Posted by Wil at 13:36 2 comments:

I made another journalquilt with the decay theme. This time I used different layers of sheers on top of each other and satinstitched the outline of leaves on it. After that I cut the leaves apart and used my soldering iron to burn holes in it. After all, the theme is decay. The leaves are attached with transparant thread on top of a handdyed piece of fabric.
Next time however I will make some changes making these kind of leaves. I will use more scraps of sheers in between the layers and I will use Misty Fuse to keep the layers together. I had thought that with the soldering iron the different layers of sheers would stick together, but they did not.
Posted by Wil at 17:43 3 comments:

Recently I finished the 7922 c&g course with the Kemshalls. Everyone who finishes a course with them gets an exhibition page on their site. Here is the link to mine: http://www.lindakemshall.com/StudentExhibitionWilOpio.htm
Posted by Wil at 16:59 2 comments:

How Creative Are You?
I came across this little test when I was reading Gabrielle's blog. Like most test I doubt how much truth is in it, but this one was fun to do. According to the test my creativity rating is 89%.
Posted by Wil at 16:57 No comments:

At the moment I am taking an online class given by Laura Cater-Woods together with a couple of my dyeing friends. It is called 'Tempting the Muse'. For the first assignment we had to use a theme and explore it in 3 different ways. I picked 'decay' as theme. The size of this piece is journalsize and I used watersoluble paper on it. I placed the paper on the sandwich and stitched the main veins with freemotion zigzag. For the smaller veins in between I used straight stitching. When everything was stitched I rinsed it very briefly. This way part of the paper remained on the quiltlet and added even more to the decaying effect I was trying to get.

This journal quilt is a sample piece for a technique I want to use on a big quilt. I used handdyed/handpainted fabric on it and quilted 3 rows of columns on it. I wanted to place emphasis on the columns so I took some Setacolor (black) and Lumiere (copper) paint and with a brush added paint on top of the quilt. I am happy with the result.

The next step was to do this too on my quilt for the Quilten Speciaal course. On this picture you see that I painted 2 columns with the copper paint. The other quilted rows will be done with black.
This quilt was a difficult one to name. It took a lot of thinking - and some input from friends - but finally I found a name for it. The title will be: 'Montezuma's mystery trails'. 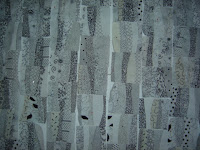 This picture is a bit of a teaser :-). In March there is a quiltshow in the Netherlands with the theme Party. It was announced months ago, but till a few days ago I had no idea what to do. Than one evening when I could not fall asleep I suddenly got an idea. This time I am not going to show pictures on my blog till the show is there, but this one I wanted to show you. For whatever it is worth, cause you cannot see much on it. Anyway, the background of this quilt will be pieced from white/black fabricblocks. Each block is 10cmx10cm (4"x4").
Posted by Wil at 19:11 No comments: 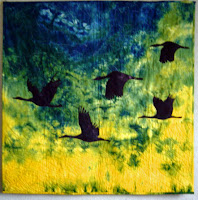 I finished my final assessment for my 2nd c&g course today. This is a picture of it. For the background I used one of my handdyed fabrics, quilted outlines of hills and clouds on it and added the flying birds with fused applique on it. The birds were than satinstitched. Size of this wholecloth quilt is 106cmx106cm (42"x42"). I call this quilt: 'Want to come along?'
Posted by Wil at 18:35 2 comments: 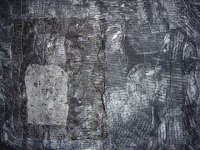 As you know I am making a second quilt as assessment piece for this course. On top of the handdyed/painted fabric I am using black and white lutrador. The picture on the left shows the orignal way of placing these two colors. The black is too subtle to be seen properly.
I had quilted it, but I was not satisfied with it so this morning I removed part of the quilting and used the two colors of lutrador the other way round. This way it looks better. The quilting has been redone. Next step on this quilt is to add black paint to part of the quilting design and maybe some red as well. Before I try the red I will make a sample - journal size - so that I know a bit how it will look.
Posted by Wil at 17:43 No comments: 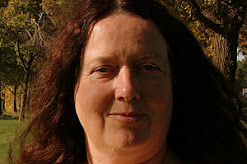 My site and other blogs: